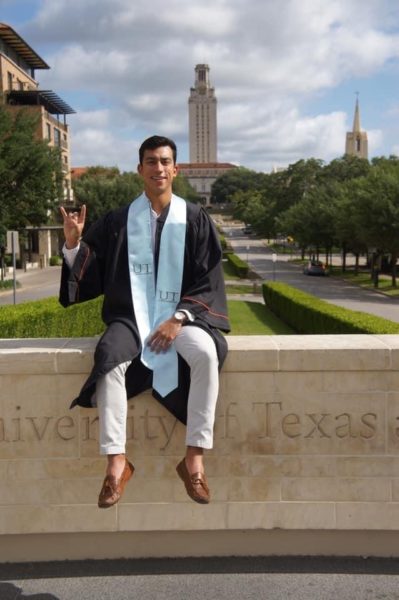 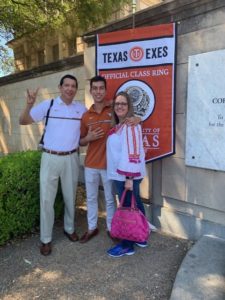 Cole Martinez ‘16, a senior from Dallas, graduated in May 2020 with a degree in Sports Management and with a minor in Business.

Cole is a multi-generational Longhorn with a grandfather, uncle, and both parents preceding him as Texas-Exes. His parents David and Kristen have been very supportive of Pike Dad’s and Mom’s Club and other special events in Cole’s years at UT. Cole has two sisters – Caroline, a graduate of Texas Tech, and Noelle who is a freshman at UT.

The Dallas Woodrow Wilson High School scholar, soccer star and football team kicker, says his years at UT Austin “have been formative with favorite UT classes being Sports Law and Strategic Management of Sports, and of course, being a part of the Pike brotherhood.”

Cole was part of a very strong Fall 2016 pledge class that numbered 35 and minted a number of Pike leaders. Cole has been a very active Pi K A holding a number of offices including Pledge Class Social Chair, Sweetheart Chair, T-shirt Chair, Dallas Rush Captain in summer 2017, and State Rush Chair in summer 2018. Cole has also been active across The 40 Acres playing several years on UT’s Men’s Soccer Club and as a member of Phi Chi Theta Business Fraternity. He also worked as a manager of UT’s Women’s D1 Soccer Team for several years while in school.

Cole was asked to reflect on what attracted him Pike to initially, and as his graduation approached, what are Beta Mu’s greatest strengths? Cole responded, “As a rushee, I was attracted to Pike because the older fraternity brothers made an effort to know me on a first-name basis and made sure I was having a good time. I immediately sensed the strong alumni relations the fraternity had to offer along with how close the brothers were when hanging out. In addition to the brotherhood and fun, I saw Pike as a place I could grow professionally and take on challenges.” 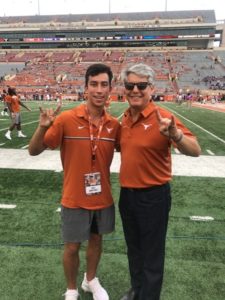 Cole Martinez, a Sport Marketing major, on the field at DKR with UT Austin President Greg Fenves in 2019.

Cole adds, “Beta Mu’s greatest strengths are setting up each member for success. One can grow a lot in the chapter and on campus through leadership opportunities. Also, Pike offers various alumni-led career advisory sessions several times annually with successful alums to answer any questions we have about certain fields that interest us. I don’t hear other chapters doing that. And our alumni are obviously making the new house a reality – I can’t wait to be at the opening in the summer!”

Cole says he cannot narrow it down to one ‘favorite Pike memory,’ “but the camaraderie at parties, vacations and formals, those late-night library sessions and playing pick-up basketball at the house are all memories that I will never forget and cherish a lot.”

Beginning in late 2019, Cole interned for the PGA Tour helping to manage volunteers and other logistical details of the PGA Dell Matchplay tourney at Austin Country Club, which, had it not been canceled due to Coronavirus, was set to attract the world’s top 64 golfers to Austin in March 2020. Cole enjoyed his internship and the PGA Tour offered him a fulltime marketing position beginning in summer 2020. Big thanks to Cole for years of dedication to Pike and congrats on your new position in the PGA Tour, and much success in the years ahead.