Pike alums gathered in Houston for cigars and refreshments at The Palm and Stogies tobacconist. More than 40 brothers attended the reception on October 2, 2013. Eleven brothers generously provided underwriting for the fun event. Beta Mu has more than 150 alums residing in the greater Houston area. 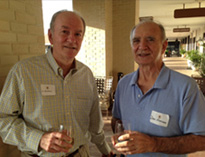 Jon Strieby ’97 and John Wallace ’78 at The Palm. This is the third year John has organized the Houston reception – in summer 2012 Pikes met at the Wallace’s Memorial area home to welcome U.T.’s mascot BEVO XIV.

Mark Hruzek ’81 and Tucker Graves ’78 were all smiles at the Houston reception.

The Dallas summer event was held August 22, 2013 at the Highland Park home of Chris Jones ’70. Alums gathered around the Jones’ verdant backyard for margaritas and fajitas, and held a putting green contest.

Austin brothers enjoyed after work cocktails and camaraderie at the Headliners Club on August 20, 2013. Several of the Active Officers joined the reception to provide a chapter update.