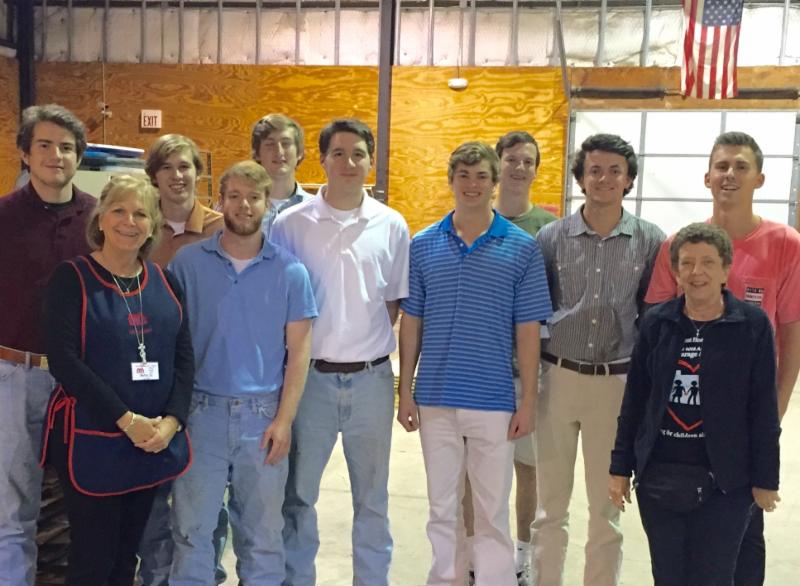 Pikes have traditionally and cheerfully participated in a number of philanthropic and community service events every school year. Sophomore Justin Smith ’14 (Houston) has ably served as Pike Philanthropy Chair and will continue in that role for a second year. In recent years, Pikes have volunteered with Juvenile Diabetes Fun Runs, Boy Scout Council Skeet Shoot fundraisers, supporting the “largest charity garage sale in Texas” at the Settlement Home of Austin, and supported a number of cancer related causes.

Through the Interfraternity Council, Pike supported the “Movember” campaign of men growing mustaches in November signifying support and raising funds to support prostate cancer research. Also in fall 2015 Pike also held an event for Sharing America’s Marrow, a nonprofit campaigning to obtain DNA samples for possible matches of donors for bone marrow transplants to fight blood cancers. Pike freshman Wes Greene learned in March that he was a potential match and is being further tested now to potentially donate and help a patient to fight leukemia!

For several years running, Pike has hosted pancake suppers in both the fall and spring for the Texas THON student fundraising series, benefitting pediatric cancer research, and as the semester closed out this month, Pike worked on an innovative promotion with the campus Chipotle restaurant to profit share one evening’s sales dedicated to the Taylor Trudeau Cycle for Life cancer research effort at M.D. Anderson Cancer Center in Houston. Taylor Trudeau was a college-age Pike in New Hampshire stricken down while in college by cancer several years ago. The Trudeau Cycle for Life campaign is being embraced by many Pike chapters across the country. Finally, Pike won the AEPhi/ZBT charity basketball tournament benefiting B+ Foundation’s childhood cancer research mission.

All in all, Pike has generously and proudly devoted hundreds of man hours, and raised more than $20,000 for cancer research in this school year. Thanks men for the impressive commitment and service!