Over the weekend of October 28-30, 2016 more than fifty brothers and wives from the early 1970s enjoyed a full weekend of activities including Friday evening dinner at Headliners Club, a Saturday morning tour of the Pike House, a Stubbs Barbecue lunch and tailgate on the grounds of Darrell K Royal Memorial Stadium before enjoying the Longhorn’s victory (!) over the Baylor Bears. Saturday evening brothers enjoyed small dinners throughout Austin and on Sunday attended a closing brunch at Matt’s El Rancho. 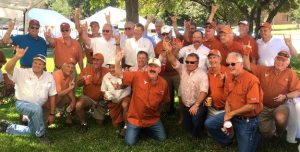 The circa 1976 Pikes at the DKR Memorial Stadium BBQ Tailgate. 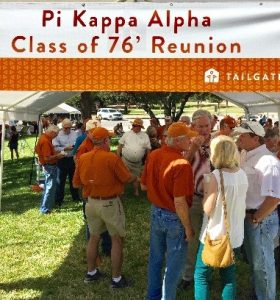 Pike Alums and their families enjoyed the reunion tailgate.