A special thanks to U.S. Congressman Brian Babin, DDS, a 1968 Beta Mu initiate, for spending time in Austin with several Pike undergrad scholars interested in government and public service on February 22.

Dr. Babin has enjoyed a long and successful career in dentistry in East Texas following military service. He served his local community as city councilman, mayor and school board member, as well as served on three state boards over the years before being elected to Congress in District 36 in Southeast Texas in 2014. Dr. Babin and his wife Roxanne have been married since 1972 and have five children and 13 grandchildren.

The Pikes enjoyed hearing a report from Washington D.C. 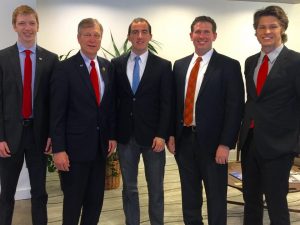 The Congressman chairs the Space Subcommittee where he works closely with NASA and he serves on the Transportation Committee. He encouraged the Pikes interested in public service to take studied positions on issues, sharpen their communication skills and undertake respectful dialogue understanding all points of view.

Dr. Babin is one of several Pikes serving in the U.S. House of Representatives along with two Pikes in the U.S. Senate.